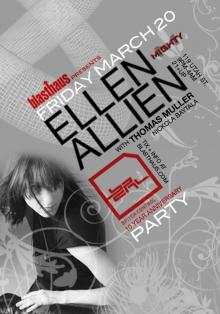 bpitch control celebrates their 10 year anniversay this year and label founder ellen allien has never been hotter. After last year's hugely successfully release 'SOOL' with a number of much sought after remixes, she's created a special anniversary party like no other. For this special occasion, Ellen has generated some heat again and will bring in 2009 various goodies to the technosapiens of the world. First off, she's created a special DJ set with stellar custom visuals by the infamous Pfadfinderei as well as musical support from the label's emerging star Thomas Muller Secondly she will be releasing the next single in the Spring for her new concept album 'BE' which is due out in September. Constructed as a 45-minute non-stop track, Ellen will take this concept to a new level, breaking with the standards of an album layout. We're looking forward to another raging party as seen from her last 2 sold-out appearances in 2008. Please join us!